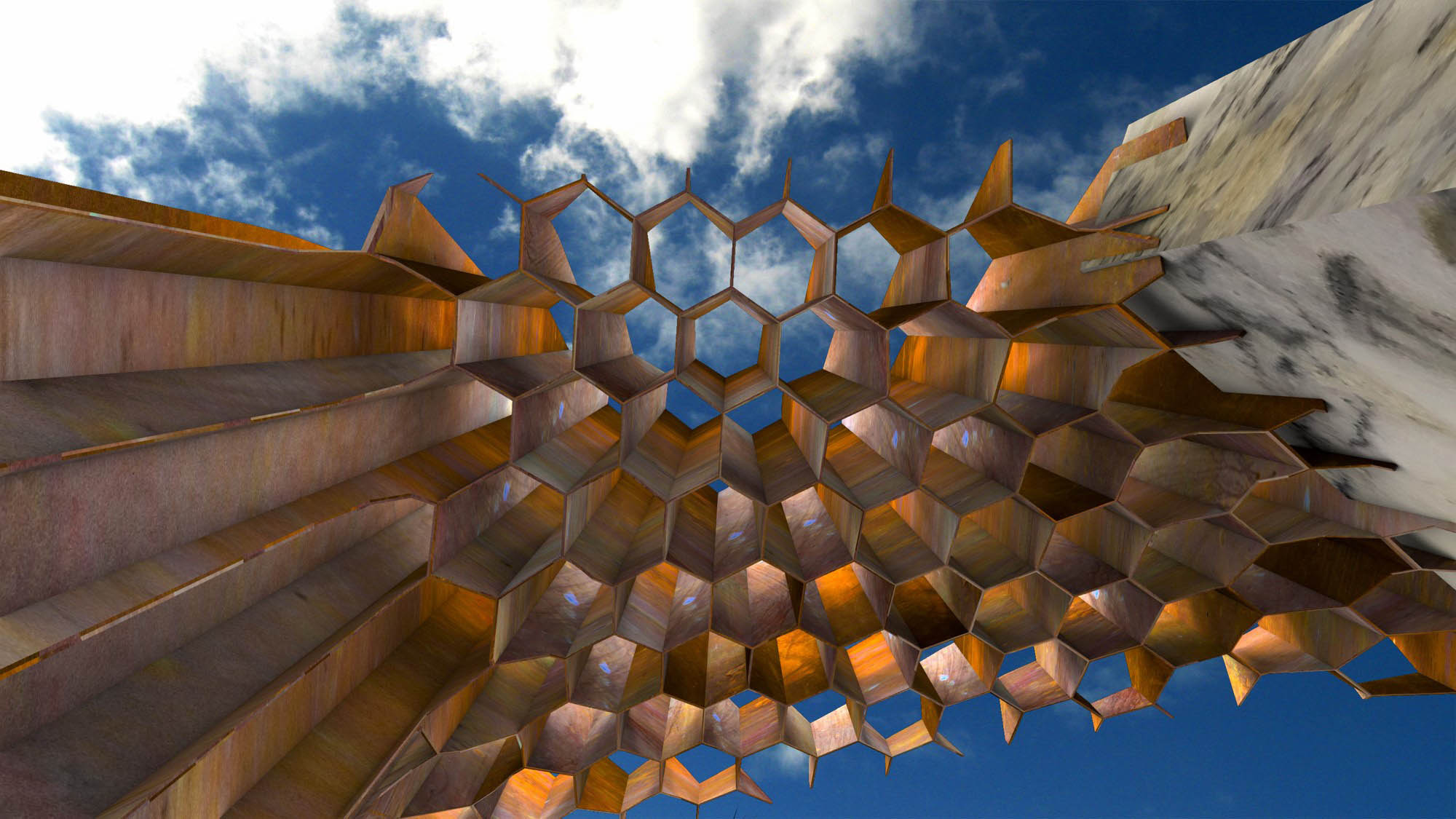 New York artist Eto Otitigbe is the winner of a commission for a significant sculpture in Mount Vernon celebrating the music of rapper Heavy D. Peaceful Journey is a monumental artistic creation that represents how harmony and balance can be achieved even in times of change. The artwork was one of fifty considered for this major commission through an open competitive process conducted by ArtsWestchester, a leading public art proponent, for 42 Broad. “Public art like Eto Otitigbe’s sculpture will enhance the downtown offering a bit of the unexpected, a bit of the extraordinary into everyday life, explains Janet T. Langsam, CEO of ArtsWestchester and public art partner to the project. “Investment in public art is investment in a community because signature artwork like this helps create more livable creative communities and more enjoyable communities.”

Peaceful Journey is borrowed from the title of one of Heavy D’s hip-hop songs. “The artwork is inspired by various points of interest such as architecture, physics, and hip-hop music. Heavy D. was a native of Mount Vernon, NY who would go on to transform the music industry and global culture,” says Otitigbe who now lives in Brooklyn.

The commissioned sculpture will be a landmark feature of the 42 Broad Street West, a mixed-use luxury rental development. It is scheduled to be installed by year-end. Placed at a highly visible plaza at the corner of Broad Street and Fleetwood Avenue in Mount Vernon’s Fleetwood neighborhood, the sculpture will be on view for pedestrians as well as drivers exiting and entering the Cross County Parkway.

ArtsWestchester and 42 Broad, (a joint venture of Alexander Development Group, The Bluestone Organization and institutional investors advised by J.P. Morgan Asset Management), chose Otitigbe from a large pool of artists who submitted proposals for the site-specific sculpture commission. The cost of the sculpture is estimated at $100,000.

Growing up in Albany, NY,  Otitigbe  was a bit removed from the NYC hip-hop scene yet he was always inspired when he heard about the popular genre coming out of places other than the five boroughs. “The sounds emanating from Mt. Vernon with Heavy D, Pete Rock & C.L. Smooth were really unique,” Otitigbe explains. He continues, “I wanted to pay homage to the Mt. Vernon community that had such an important place in hip-hop with this work of art.” The artist, explains that the song the sculpture is named after “offers a thoughtful and complex picture of the lives of black and brown people living in places like Mount Vernon, the Bronx, or Los Angeles,” and that Heavy D’s music was transformative for him in his youth. “This sculpture offers me a chance to pay tribute to Heavy D, R&B music, and hip-hop culture, all of which had an immense influence on me as I navigated my youth.” “The artwork is inspired by various points of interest such as architecture, physics, and hip-hop music. The name is borrowed from the title of a hip-hop song by rapper Heavy D, who was a native of Mount Vernon, NY and who would go on to transform the music industry and global culture,” says Otitigbe, of Brooklyn.

Mount Vernon Mayor Shawyn Patterson-Howard is thrilled to have this new piece in his city. “Otitigbe’s abstract artwork will add a spectacular focal point to a gateway to the City of Mount Vernon. Heavy D was an integral part of making Mount Vernon the Jewel of Westchester; his influence in the creation of this sculpture makes it more meaningful,” explains Patterson-Howard. “Although Heavy D has begun his ‘peaceful journey,’ Mr. Otitigbe’s sculptural arch is a true testament to the pride, resilience and transformation of Mount Vernon.”

What was happening in the world, as well as his personal life influenced Otitigbe’s design.  “When I started this project, over a year ago, I set out to design an artwork that played with the theme of transformation… I was thinking about movement, departures, homecomings, and transitions. Fleetwood, as a community, is experiencing change as new development projects like this one attract people to Mount Vernon. Personally, I was experiencing a major life transition as I balanced the joys and challenges of being a new father.”

As Otitigbe see it, Peaceful Journey reminds us that  the idea of taking a journey today is very different than it was a year ago; it now has a lot more risk in it. “This sculpture and its invitation for people to pass through its portal is a waymarker for a peaceful journey for people leaving the building or the community and for when they return,” he says.

Collaborating with architect Michael DiCarlo to design Peaceful Journey, Otitigbe’s sculpture is made of Vermont Fantastico Marble, stainless steel, and COR-TEN steel. The form cycles between stone and metal and appears to continue its path through the concrete. The hive-like steel structure references pointed archways that were in South East Asian and Islamic Architecture.  This style of innovative building technology was later made popular in Gothic architecture throughout Europe.  “The hexagon is a signifier for strength and harmony.  As one passes under the archway and looks up the view of the sky is pixelated by a hexagonal grid. Even the surface of the metal will transform over time as the COR‐TEN steel weathers and changes color. The stone monolith also conveys a sense of balance and affirmation while its surface carries an organic fluid pattern; evidence of the stone’s transformation over time,” explains Otitigbe.

Located at a prominent gateway to the city of Mt Vernon, this site-specific sculpture will be visible to thousands of people passing by every day. Mark Alexander, principal of 42 Broad, knows it will have an impressive impact.  “Public art is integral to our development philosophy.  In this particular Fleetwood project, we are allocating a sizeable budget in highly visible art to create a memorable place, promote community pride, and to raise the level of aesthetics and energy in the city,” explains Alexander. “Great public art should be transformational, and that is our intent with Otitigbe’s monumental sculpture.  Peaceful Journey compliments the metalwork and brick masonry of the building, while inviting the public to walk through its dappled lit archway.”

The project is part of ArtsWestchester’s long-term commitment to public art and to the arts in Mount Vernon.  ArtsWestchester currently has a Mt. Vernon grants initiative that provides funding for artists working in the city and they have been the recipient of two Department of Education grants that brought professional artists and arts programming into the Mt. Vernon Public Schools. ☐ 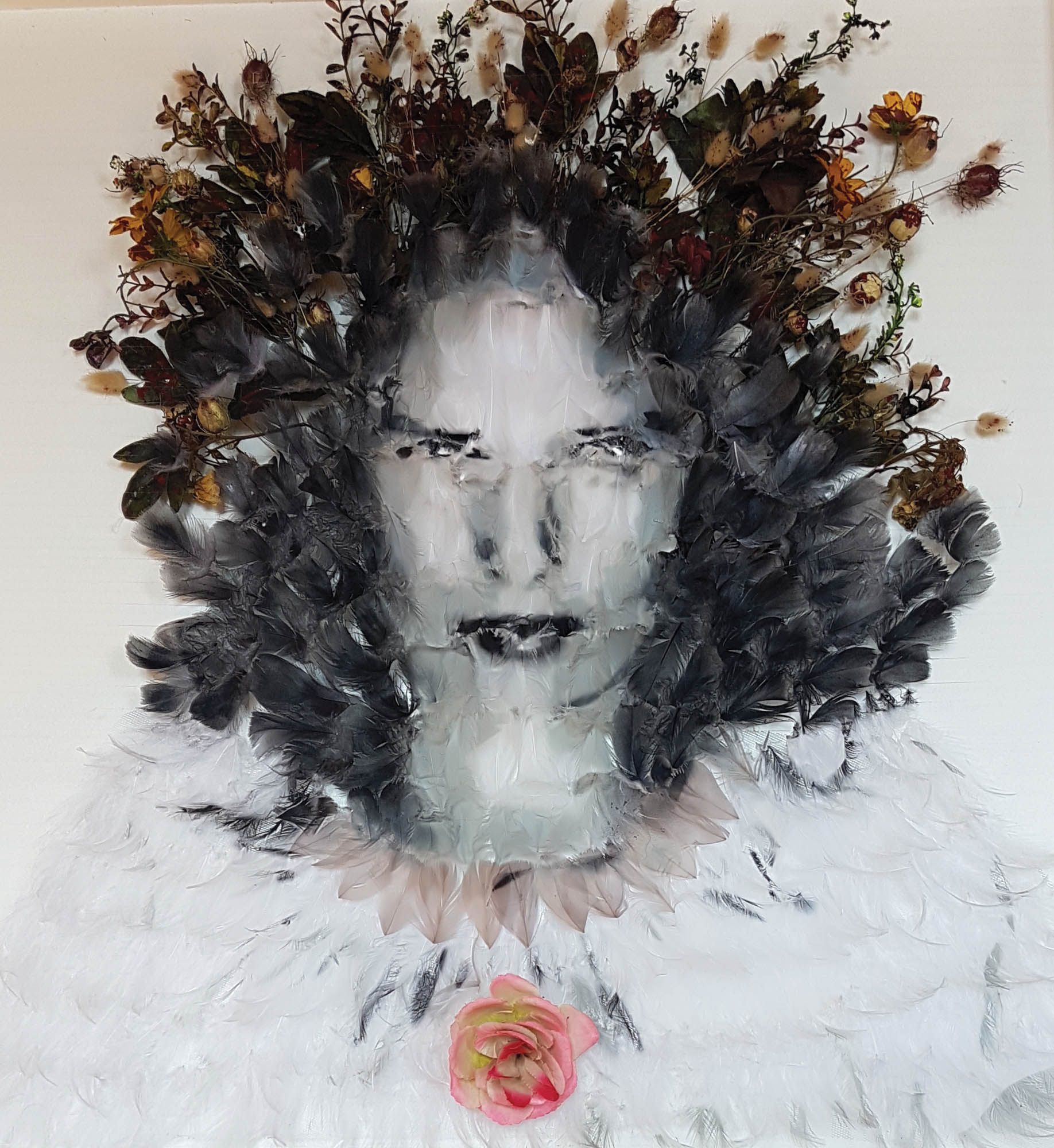 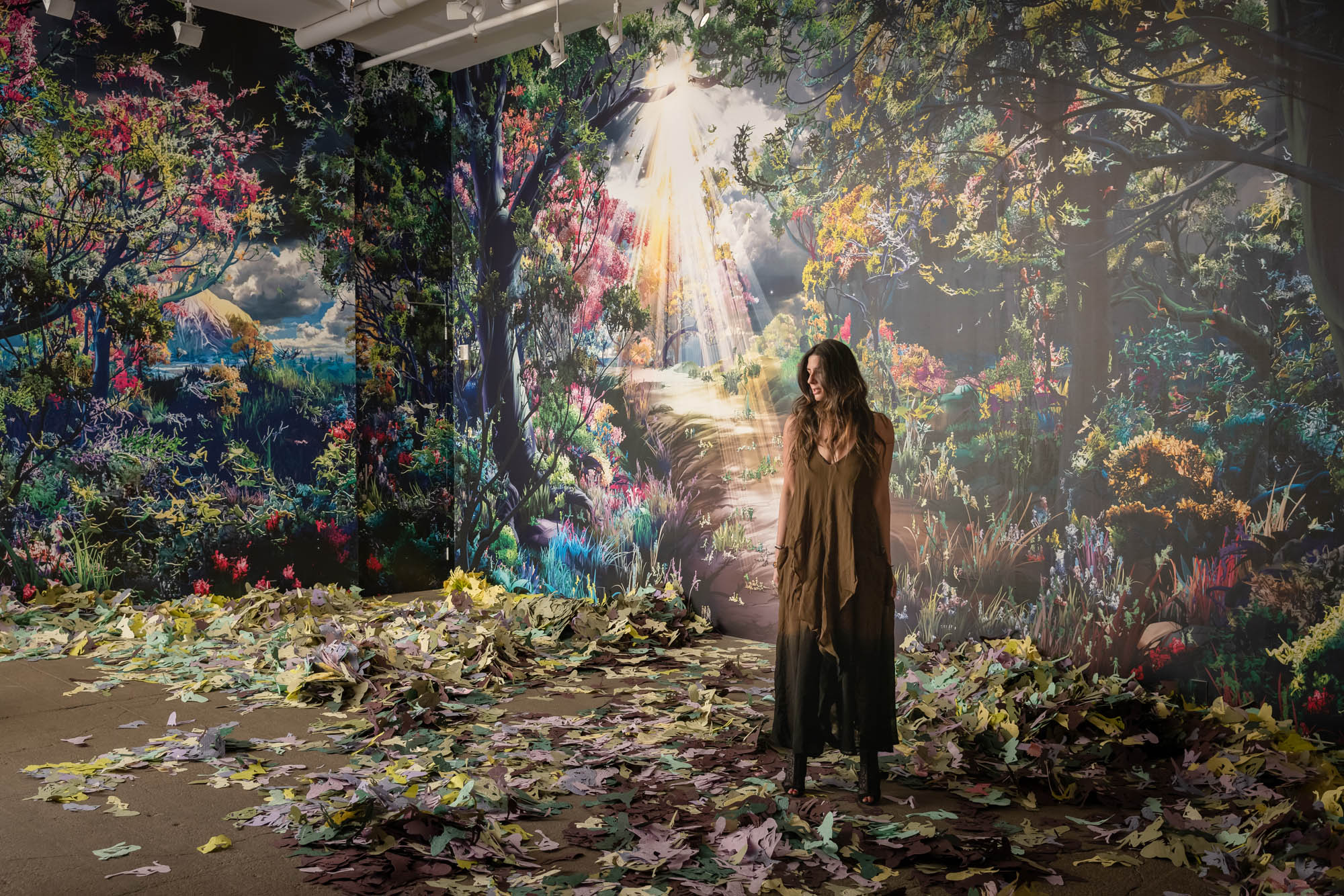 The Work of Jessica Lichtenstein 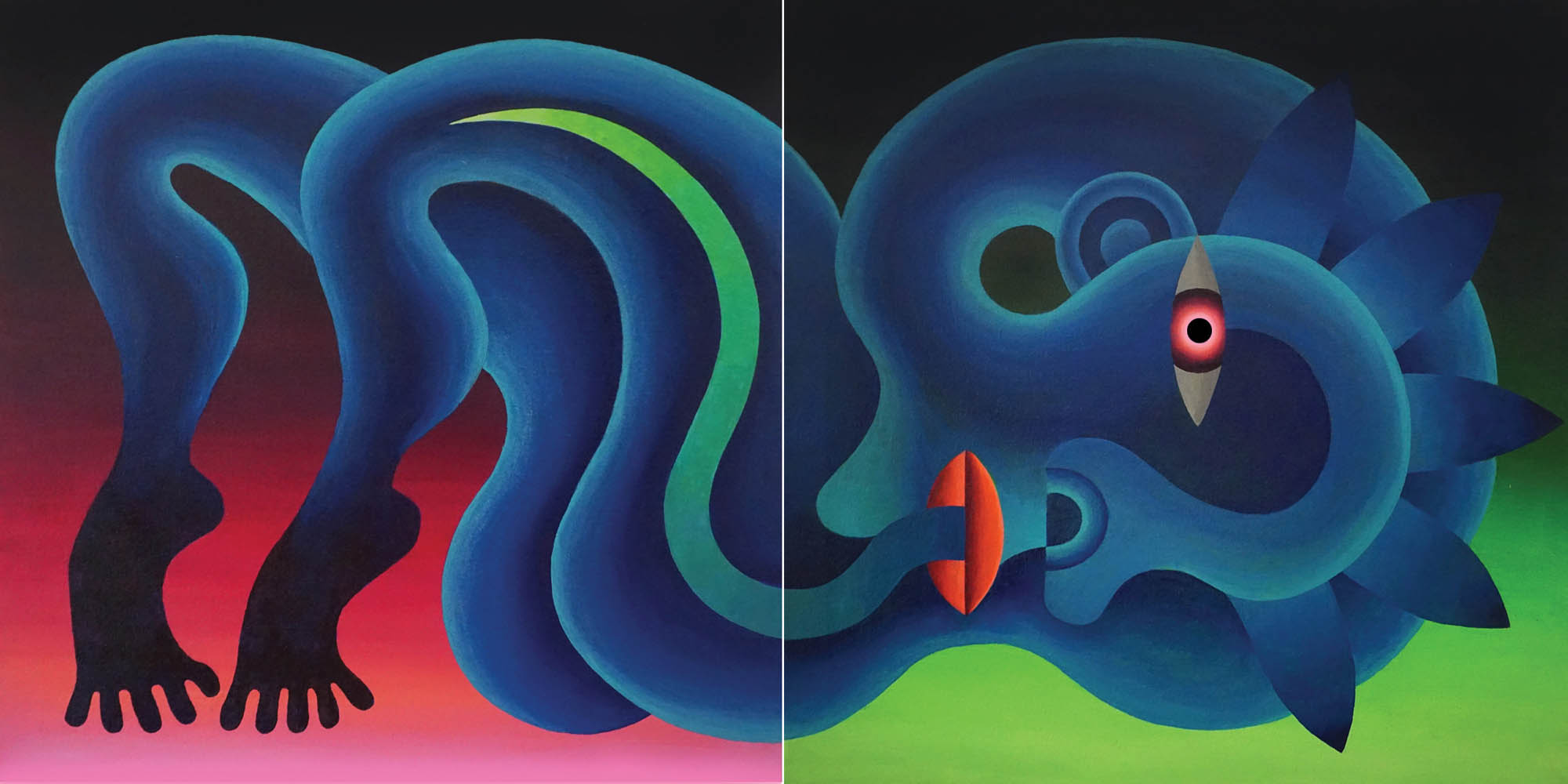