Miami’s esteemed developer, Moishe Mana, is one of the most salient visionaries and enlightened entrepreneurs of the 21st century. His formidable projects are the foundation for building roots to enable socially conscious and cross-culturally cohesive communities that foster sustenance.

Erasing the line of demarcation, Mana is humanizing the urban realm and propelling the impact of South Florida’s global telepresence in the marketplace. What’s most relevant about the revitalization in this perceptual region, avers Bernard Zyscovich, Founder & CEO at Zyscovich Architects, “We use space to enhance opportunity.” Mana’s resolute persistence is one that begets organizational wit and thoughtful decisions. “Our idea is to create this platform in areas where Mana controls large amounts of the property so that the culture of innovation and creativity can use real estate as a vehicle for social and environmental benefit,” utters Bernard.

“We use space to enhance opportunity.”

The prescience of Mana’s dream unfolds… making Moishe Mana a name to remember. Before we begin Mana’s story, let’s revisit Miami’s past.

With every new Century, Miami welcomes modern idealists to its shores. The 19th Century pioneer Julia Tuttle said it best, “I see a metropolis growing out of the mangroves.” Referred to as the “Mother of Miami” her doggedness incorporated the city, and this was made possible by the “Father of Miami,” Henry Flagler. He inaugurated the Florida East Coast Railroad into Miami in April of 1896, and in July of 1896, a new municipality was incorporated. By 1897, the population grew to 2,000. The railroad precipitated a century of growth and vibrancy. Miami would gain its famous nicknames as it went through its growing pains, from the “stomping ground for the rich and famous,” to the “Capital of Latin America.”

Miami had progressed from its infamous cover of Time magazine, “Paradise Lost,” when the city became obsolete with Cocaine Cowboys and the Mariel Boatlift to the days of when Miami Vice sparked a cultural phenomenon and brought the sexy back to its beaches.

Fast-forward to recent cover stories in the New York Times, “Miami is more than Art Basel” and “Downtown Miami, More than a gateway to the Beach,” Miami’s proclamation is in the staggering number of twenty-three million welcomed visitors that have made it the 2nd largest tourist hub in the country after New York City.

In conjunction with the trailblazers and developers, Mother Nature has contributed to the coast’s popularity from its sensitive eco-systems, sun-kissed crystalline waters of outstretched oceanfront and soft-hued blue skies overlooking Biscayne Bay.

The mid-20th century bestowed community activist Barbara Baer Capitman who brought global attention to preservation in her flight to save neglected art deco buildings. The successful lobbying efforts of Norman Braman and Robert Goodman made it possible for ART BASEL to call Miami Beach Convention Center home with its first show opening in 2002 that created accessibility for Latin American art collectors.

We can’t forget the pivotal moment that forever changed Miami’s global presence from the notorious to the well-renowned with the boom of South Beach. It all started with a fabulous pictorial swimwear spread in Italian Vogue by internationally acclaimed fashion photographer Bruce Weber. Tony Goldman, an eminent redeveloper of South Beach prophecy was to create a premise of departure and exuberance, a sheer utopia – a playground of glamour and affluence. The Beach acted as a billboard to its streets filled with sleek supersonic machines, and the picture window view was a mirror to more than its ocean’s curves. With an invitation from Goldman, Eileen Ford’s statuesque models pranced on its golden sands to capture it all on camera in a sizzling photoshoot. When the magazine hit the newsstands in the spring of that year, South Beach garnered the attention of the most celebrated, liberated, and treasured designers of a generation, Gianni Versace. Versace was enraptured with Miami’s beauty that he decided to make the Beach his new oasis. The ”buzz” engendered a flux of European investors to construct the brand-new “American Riviera.”

As prices soared, the same developers that claim the resurgence of Miami Beach looked to its mainland.  Founder and CEO of Dacra Development and co-founder and co-owner of Design Miami Craig Robins built The Design District that infuses the trendy Soho charm of New York among its gallivanting architecture of art-galleries, ateliers, high-end fashion boutiques, lounges, and restaurants. Goldman’s foresight touched down in Wynwood Art District purchasing blocks of industrial warehouse spaces that were once home to abandoned factories of yesteryear to assemblage the largest Street Art Museum – Wynwood Walls. Forbes magazine names Wynwood as “the top 10 destinations in the Nation to visit.” 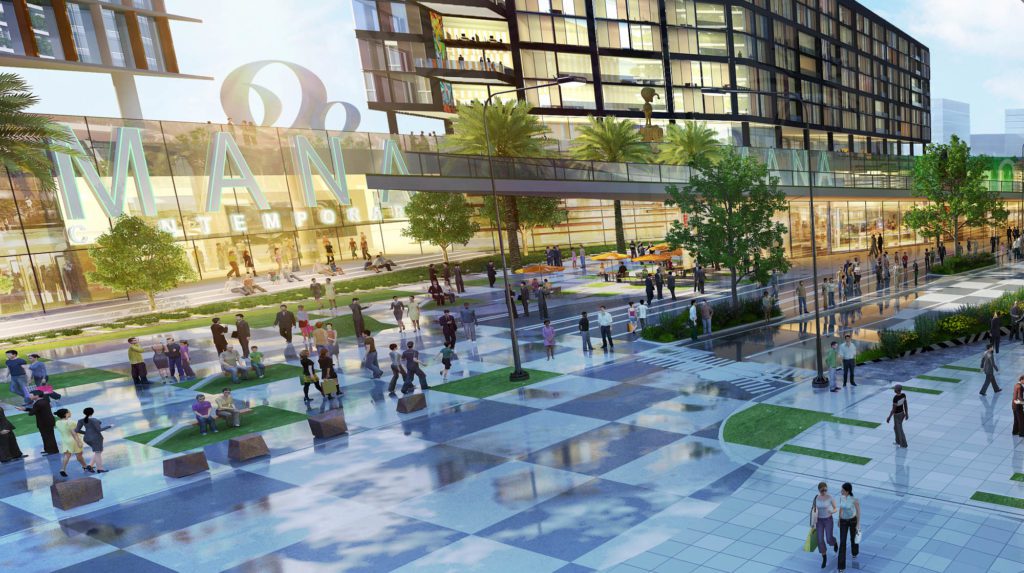 The contribution of these developers positioned Miami back on the map. However, what about the sustainability of its neighborhoods, of its residents? Locals are forced to leave due to the sky-high rents and home values. As real estate investors scramble to gentrify neighborhoods with spec homes and high-rises, what remains left of the discarded city is from Overtown, Little Havana to Little Haiti, and these districts risk losing their multicultural identity. Everything has been sold to developers and snowbirds, therefore making tourism the only viable industry product. Much of downtown’s redevelopment lies south across the Miami River in an area known as Brickell, within reach on foot or via the free Metro mover electric train operated by the County Transportation Authority, which still caters to the upper-echelon and is a deserted ghost town with empty storefronts.

Where‘s a Miami native supposed to live, work, and play? The solution is Moishe Mana’s “MANA COMMON,” an impassioned project in downtown Miami that provides affordable housing and a thriving business enterprise that will drive the job market with diverse opportunities for its local citizens to call home. Bernard Zyscovich adds, “The commonality of a community (the idea behind Mana Common) generates interaction which results in a particular culture.”

“Architecture is about the use within a building, whereas the Urban vision of the work of Mana is about the creation of community and connectivity.”

Self-made Billionaire Moishe Mana is turning the chapter on Henry Flagler. In 1983 he arrived in New York with $800 in his pockets. He left his neighborhood of Tel Aviv, Israel, and dropped out of law school to move to the United States to begin his rags to riches journey.

It all started with a van. New York City brought many experiences and colorful characters to Mana, one of those characters owed him money, and not being able to pay him back in cash, gave Mana a van. Mana began his first business here in America: A Man with a Van. His moving company soon became one of the city’s top residential movers and slowly progressed into Moishe’s Moving Logistics, one of the largest moving companies in the tri-state area. From there, he moved into real estate amassing 1.5 million square feet of property.

In 2009, Moishe Mana began purchasing acres in Wynwood, aggregating 40 acres of property in an attempt to transform the neighborhood into a dynamic terminal of artistry, fashion, and technology. MANA Wynwood was the first project that serves a giant warehouse and doubles as a convention center, block party, and concert venue. Eventually, Wynwood wasn’t enough, Mana needed to expand his empire, but how? Where could he find real estate that, if under his care, could transform Miami? Nowhere else, except in downtown Miami’s historic Flagler district.

Mana is a man with great vision, and he’s masterminded a brilliant plan to turn Flagler’s district into “the Silicon Valley” of Latin America. “Silicon Valley of Latin America” is a campus-like project where workers can live in micro-units and walk to their offices as well as to restaurants, stores, and bars that will be set up in his buildings. As Mana puts it; “We are building the infrastructure for all these companies. Imagine Miami as the head and Latin America as the rest of the body. It’s going to be a place of connection, collaboration, and communication with each other.” Mana sees tremendous potential in downtown’s strategic location, so he is accumulating as many properties as possible to bring about real change and benefit the entire city of Miami. To date, he has purchased over 56 properties in downtown Miami.

Before he begins, Moishe needs the city of Miami to fix the understructure — heating, ventilation, air conditioning systems, electrical systems, and rooftops in some of these buildings. The first building to be rehabilitated is the 13-story office building at 155 S. Miami Ave. Another component is the Flagler Station, the future tech terminus at 48 E. Flagler St. It will be Miami’s version of Paris’ Station F, an epicenter that opens in a train station, only here it will be called Station H in homage to Florida railroad pioneer Henry Flagler. Then there will be the old Foot Locker building at 38-44 E. Flagler St. for the envisioned food hall and spice market.

Mana’s visions have no deadline. There is no rush for him. He began buying downtown properties since 2013 and, to this date, remains unchanged and untouched. His opinion on the haters that question him and believe that he is slowing downtown redevelopment is, “If they are frustrated, what should I say?” What these people don’t know is that the longer these buildings remain unchanged, the more money Mana loses, which is why he spends every day slowly chipping away at the massive block that is the new Flagler Station. Whether it’s meeting with tech companies from other countries to be a part of the project or meeting government officials from across the globe to see how they can be incorporated, he’s always working towards his goal. Miami isn’t the only place where this is happening. Mana has similar projects set up in Jersey City and Chicago.

Mana believes that “Mana Common” is more than just stores and architecture; it’s a philosophy. Bernard Zsycovich concurs, “Architecture is about the use within a building, whereas the Urban vision of the work for Mana is about the creation of community and connectivity.”

Moishe is building a city, not on profit or income, but culture and life. He expects to incur $600 million from investors, to begin with, but later plans to receive $1 billion to continue his dream. Mana wants this to be the conjunction between Latin and Asian countries to intertwine their ideas using technology as a way to interface. It’s undeniable why he calls it “MANA COMMON,” – it’s a way of giving back to the people, unifying and learning from each other.

“Miami needs to change. Until now, it was a tourist destination, and that’s it. Now we want to turn Miami into a global trading command post of technology. It’s very ambitious for me to say something like this. However, I am putting my money where my mouth is,” Mana expresses. “I am doing it. Maybe I fail. Maybe I succeed. G-d knows. However, I am doing what I am saying. I need everyone to be patient.”

The patience has paid off with the City of Miami recently approving 22.5 million in funding, and the word is the first project is slated to break ground in 2020.

For more information on Mana Common, go to manacommon.com. 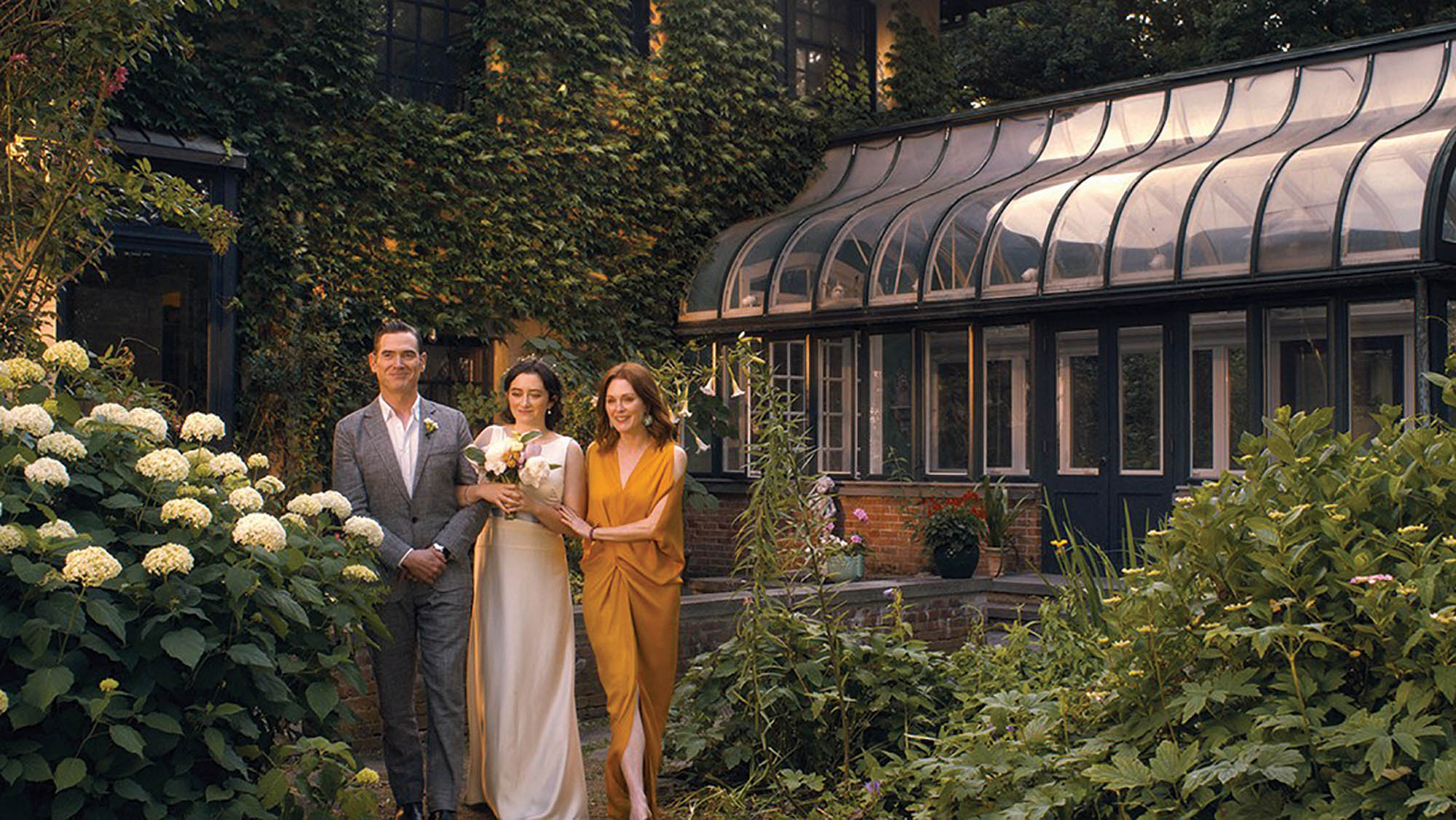